The Olfactory System of the Mouse
Home

The Olfactory System of the Mouse

The sense of smell (olfaction) is designed to detect a very wide variety of chemical structures in the external environment. In the mouse, chemosensory detection at the molecular receptor level is mediated primarily by a repertoire of ~1,100 odorant receptor (OR) genes expressed in olfactory sensory neurons (OSNs) in the main olfactory epithelium. These ORs have the seven-transmembrane structure that is typical for G-protein coupled receptors. Each mature OSN is thought to express just one OR gene, and only one of the two alleles of that OR gene. Axons of OSNs that express the same OR gene terminate and coalesce into a few glomeruli, which are well-delinead anatomical structures in the olfactory bulb numbering ~3,600 in an adult mouse. What are the molecular mechanisms that enable an OSN to restrict expression of the immense OR gene repertoire to just one gene and one allele of it? What are the molecular and cellular mechanisms that enable axons of OSNs that express the same OR gene to coalesce with high precision into glomeruli? We are approaching these fundamental biological questions by genetic manipulation of the mouse.

Relationship between number OSNs and volume of glomeruli

How many OSNs per mouse express a given OR gene? A traditional approach for visualizing OSNs and their axons consists of tagging an OR gene genetically with an axonal marker that is cotranslated with the OR by virtue of an internal ribosome entry site (IRES). We have now generated full cell counts for gene-targeted strains of the OR-IRES-marker design coexpressing a fluorescent protein [1]. These strains represent 11 OR genes, a 1% sample of the OR gene repertoire. We found a 17-fold range in the OSN number per mouse across these OR genes. We discovered a strong linear correlation between OSN number and the volume of the corresponding glomeruli. A practical outcome of our findings is that total glomerular volume can be used as a surrogate measurement for estimating OSN numbers in these gene-targeted strains. 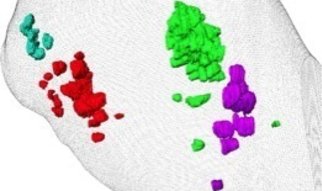 How reproducible are the positions of glomeruli that are formed by the coalescence of axons from OSNs that express the same OR? These positions are traditionally described as "stereotyped". We have now assessed quantitatively the positions of OR-specific glomeruli using serial two-photon tomography [2], a novel automated method for whole-organ fluorescence imaging that integrates two-photon microscopy with serial microtome sectioning. Our strategy is multiplexed: by repeated crossing, we generated two strains of mice with gene-targeted mutations at four or five OR loci for a total of six ORs. We visualized the glomeruli by immunolabeling wholemount samples of the olfactory bulb. In these high-resolution 3D-reconstructed datasets we then assessed glomerular positional variability between the bulbs of one mouse (intraindividual) and among the bulbs of different mice (interindividual). We found that the level of positional variability of glomeruli is more substantial than typically acknowledged. Unexpectedly, some glomeruli are more variable in their position than others. Our results quantify the level of precision that is delivered by the mechanisms of OSN axon wiring, differentially for the various populations of OSNs expressing distinct OR genes. [more]

A mouse OR with an extremely broad odorant response profile 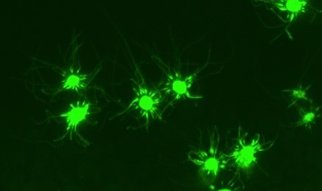 In addition to the main olfactory epithelium, the vomeronasal epithelium is also chemosensory, primarily but not exclusively for the detection of pheromones. The canonical chemosensory neurons in the main olfactory epithelium, the OSNs, express OR genes, and depend on the cAMP-generating enzyme Adcy3 and the ion channel Cnga2 for chemosensory signal transduction. On the other hand, the canonical chemosensory neurons in the vomeronasal epithelium, the vomeronasal sensory neurons, express two repertoires of G-protein coupled receptor genes that are unrelated to OR genes, and depend on the ion channel Trpc2 for chemosensory signal transduction. We have recently discovered two novel types of neuron in the mouse main olfactory epithelium that have hybrid properties: they express both Cnga2 and Trcp2. These two novel cell types types can be distinguished at the single-cell level by expression of Adcy3: positive, type A and negative, type B. We found that some type A cells express OR genes. We have now found, by single-cell analyses of gene expression, that among MOE cells, type B cells are unique in their expression of the soluble guanylate cyclase Gucy1b2. We generated a mouse strain in which Gucy1b2 is coexpressed with a fluorescent axonal marker using the IRES strategy, enabling us to visualize selectively the coalescence of axons of type B cells into three distinct glomeruli in the main olfactory bulb. Our molecular and anatomical analyses define Gucy1b2 as a unique marker for type B cells within the MOE. We are currently pursuing functional studies of Gucy1b2 and of type B cells, which appear to have a specialized chemosensory function. [more]

The main olfactory epithelium is a component of the main olfactory mucosa, a complex tissue that is composed of multiple cell types, neuronal and non-neuronal. RNA-seq, also called deep sequencing, has emerged as a powerful approach to quantify gene expression in tissue samples and very recently also in single cells. We have now applied RNA-seq hierarchically in three steps of decreasing cellular heterogeneity: starting with crude tissue samples dissected from the nose, proceeding to flow-cytometrically sorted pools of mature OSNs, and finally arriving at single mature OSNs. We showed that 1,087 of 1,099 (=98.9%) of intact olfactory receptor (OR) genes are expressed in mature OSNs, indicating that essentially every member of the OR gene repertoire is a candidate receptor for odorants based on the minimal criterion of expression in mature OSNs. We found that single mature OSNs typically express a single intact OR gene abundantly, consistent with the one neuron-one receptor rule. For the single OSNs where the two alleles of the abundantly expressed OR gene exhibit single-nucleotide polymorphisms, we demonstrate that monoallelic expression of the abundantly expressed OR gene is extremely tight. We also found that two single cells lack OR gene expression but express Trpc2 and Gucy1b2, representing the type B cells that we had discovered earlier with another single-cell based method for gene expression. We discovered that these cells can be distinguished from canonical OSNs by the differential, higher expression of at least 55 genes. We can thus firmly establish these type B cells as a novel type of chemosensory neuron that is fundamentally distinct from canonical, OR-expressing OSNs.